On March 16th, the Federal Reserve signaled it will be raising interest rates by a quarter point. The federal-funds rate will be increasing from near zero to somewhere around.25%. This is the first time since 2018 that the Fed has increased interest rates. 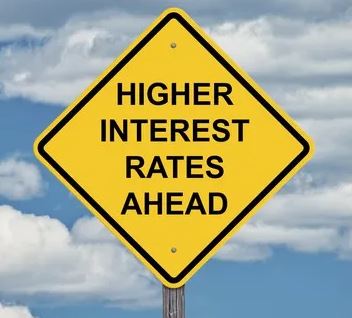 Why is the Fed raising rates? It’s all about Inflation

For over 30 years inflation has been relatively tame. As of March 2022, the 30-year inflation number is about 2.18%. Inflation is the process by which all of the goods and services you purchase increase in cost over time. Take for example a gallon of gasoline. At the turn of the millennium, in 2000, a gallon of gas in California cost about $1.20 (click here for more info). Just the other day I paid about $6 per gallon to fill up my vehicle. This increase in price is a perfect example of how inflation works.

Think about how much you paid for the first home you bought and then think about what you could sell your home for now. This is another classic example of inflation.

While inflation has been tame for the last 30 years, it has certainly heated up over the last 12 months.   The annual inflation rate for the United States is running at 7.9% for the 12 months ended February 2022 — the highest since January 1982 and after rising 7.5% previously, according to U.S. Labor Department data published March 10.

Why does increasing interest rates slow inflation down?

As mentioned previously, the federal funds rate is the interest rate that member banks charge each other. When it increases, banks increase the prime rate, which is the rate that banks give to their best customers. As the Fed increases rates, all of us will be paying a higher interest rate to borrow money from the bank. This has the effect of slowing down or tightening the money supply in the economy. As the money supply tightens, money is not as easy to come by and prices of goods and services gradually start to level off (or at least stop going up as fast as they are now!).

Has this happened before?

The Federal Reserve is constantly assessing the money supply, the economy and the impact interest rates have on both. During the 1980’s, the federal funds rate soared to 20% to combat double digit inflation. In 2008, the Federal Reserve lowered the federal funds rate to 0% to revive the economy during the Great Recession. It did the same thing in 2020 to minimize the economic damage from the Covid-19 crisis.

What is the impact of higher interest rates on me?

When interest rates are higher, your borrowing costs increase and the payment on your car, home or credit card will be higher. If you need to secure long-term financing, you may want to consider doing it now. The Fed signaled its plans to increase rates another six times from here. While the cost to borrow money will most likely not get back to 1980’s inflation busting numbers, it’s clear it will get more expensive in the coming years. 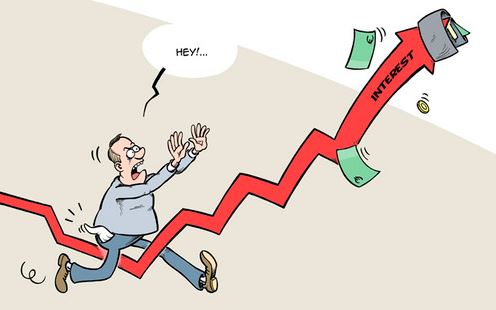 What is the impact of higher interest rates on your investments?

There is no doubt that some companies will struggle with higher interest rates and some companies will thrive. That’s why you need to own a diversified mix of ETF’s and mutual funds, which will give you exposure to thousands of companies. Growth companies, which have had a strong run since the beginning of the 2009 economic recovery, do well when they can borrow money on the cheap, invest in their growth and create value for shareholders. As rates rise and the cost to borrow money increases, growth companies may not do as well as they have over the last 14 years. This has been a period of historical outperformance when it comes to growth stocks, and it would not be surprising for their performance to cool off at some point. Meanwhile, when rates rise, entities like banks and insurance companies do well. Many of these firms are considered value companies.

A rising interest rate environment will serve to slow down the red-hot real estate market. As the cost to borrow increases, we won’t see people making offers on homes that are significantly higher than the asking price. The real estate market has been on a tear the last couple of years, and this may start to soften.

When it comes to bonds and fixed income, higher interest rates will mean a better yield for bond holders. Savers and bond holders alike, have been unusually punished over the recent time period because interest rates have been so low. As rates start to move back to more normal levels, yields on checking and savings accounts will increase and bond yields will rise as well. For the more conservative parts of your investment portfolio this is a good thing. However, the thing to be wary of, is when interest rates rise, bond prices fall. The longer duration bonds could potentially see dramatic decreases in price in a rising interest rate environment. For that reason, we have been careful to keep the duration of all of your bonds very short, in order to protect you.

At the end of the day, rising interest rates is not necessarily a bad thing. The Federal Reserve is tasked with the job of conducting national monetary policy, supervising and regulating banks, maintaining financial stability, and providing banking services. With annual inflation running as high as it has in the last 40 years, it would be irresponsible of the Fed not to raise rates at this point in time. Expect more of this in the future as they work hard to curb inflation and slow it down.

And if you need to secure any long-term debt, make sure to do so now! If you have any questions or concerns or would like to talk to us further, please do not hesitate to contact the office.